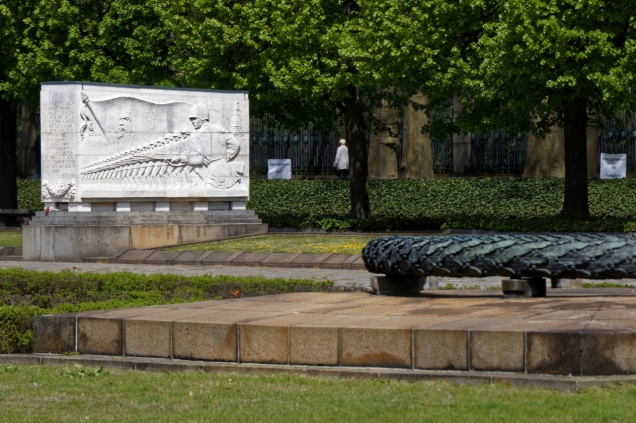 Somewhat like the October Revolution actually taking place November, Russia’s Victory Day is celebrated on May 9th, not 8th, as in most of Europe. The reason is simple – Soviet commanders countersigned the Nazis’ surrender document late at night on May 8th 1945 at Berlin-Karlshorst, but by that time it was past midnight in Moscow and hence May 9th. Even Russians abroad engage very much with this national holiday, which showed when I visited Berlin’s Soviet War Memorial in Treptow Park on Sunday, May 7th. There were fresh flowers everywhere, and Russian-speaking visitors galore. 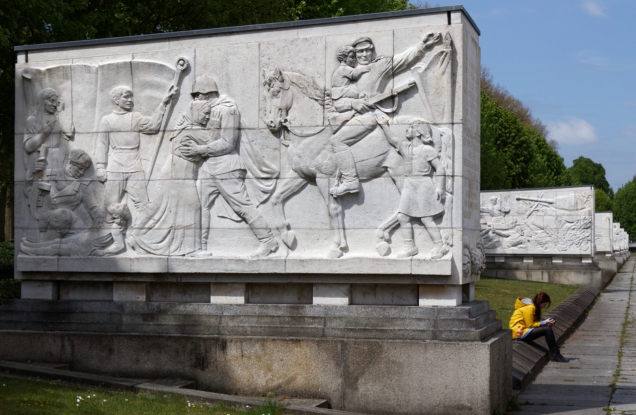 In recent years, tensions between Russia and the West have grown over the war in Eastern Ukraine, the attack on Flight MH17, the annexation of Crimea by “little green men”, Russia’s support for Syria’s Assad, Russian interference in Western elections, and its poisoning of political opponents with chemical weapons. As a countermove, “Moscow” is framing the celebrations of the 9th of May ever more strongly as a show of Russian military force and anti-Western propaganda. 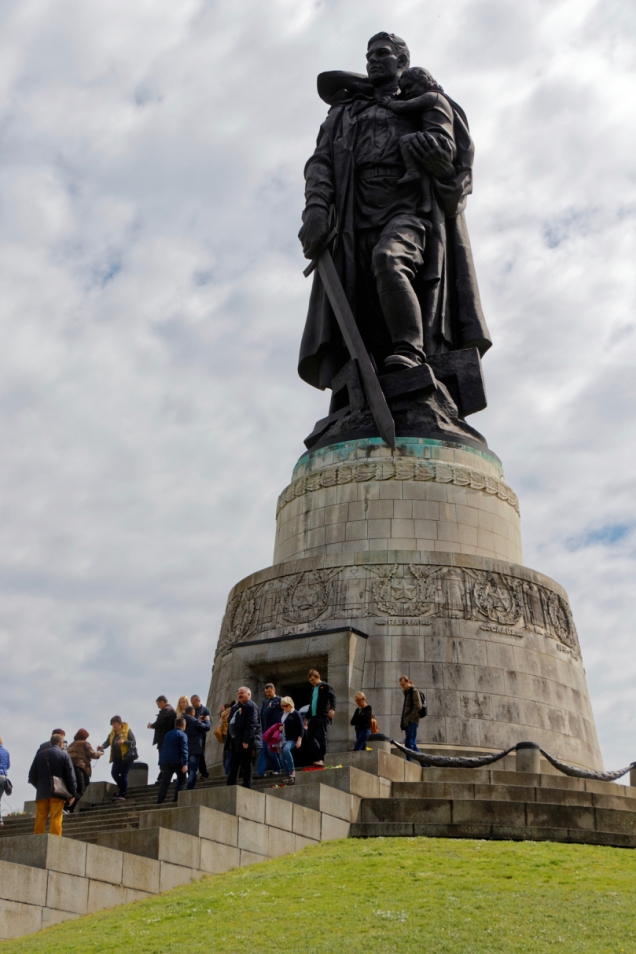 This is a pity, because it tarnishes the memory of the Red Army’s heroics and the suffering of the Soviet population during the Great Patriotic War. It may be a truism, but just like you cannot compare today’s Germany to the Nazi Germany that tried to force Slav Eastern Europe into slavery, there is also no comparison between today’s Russian regime and the Soviet Union that vanquished the Nazis in Eastern Europe. I had to keep reminding myself of this as I wandered among the Russian speakers at the Soviet memorial. 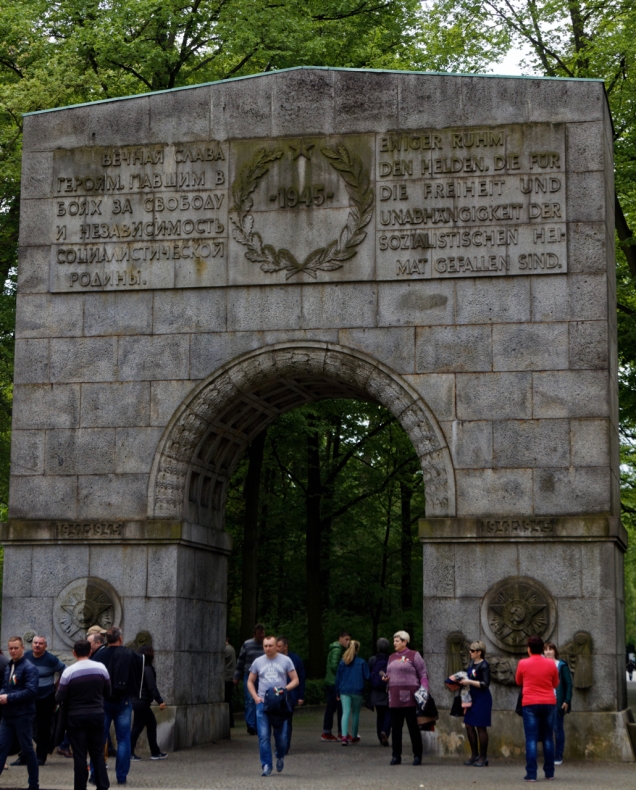 This war memorial, built in 1949, is also a military cemetery, just like the Soviet monument with the two tanks near the Brandenburg Gate that is probably more familiar to most Berlin visitors. Indeed, the Red Army had 80,000 dead to bury after the Battle of Berlin, so, sadly, they needed all the burial space they could get. But the Treptow memorial is something different. 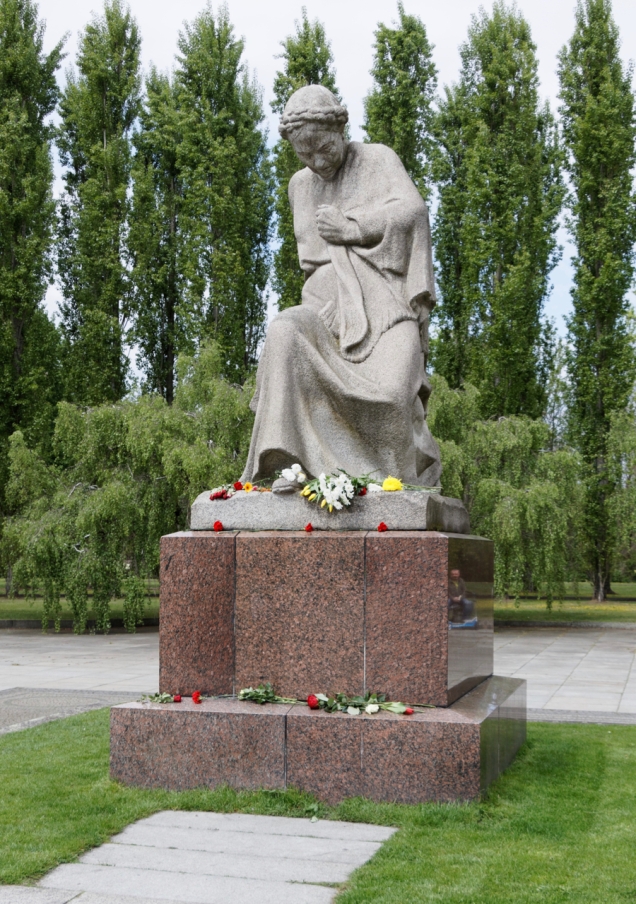 You enter through a simple triumphal arch, and then arrive at a grey granite sculpture (at a still normal, albeit larger than life size scale), of a woman who might be “Mother Russia”. But if you then look south, down the main axis of the monument, your jaw will drop. The monument stretches over a distance of about half a kilometer.

Along a slowly rising avenue, framed by weeping willows, you reach two colossal, red stone triangles that symbolise Russian flags, each flanked by a statue of a Russian soldier, one old, one young, both already lavishly decorated with flowers on May 7th. 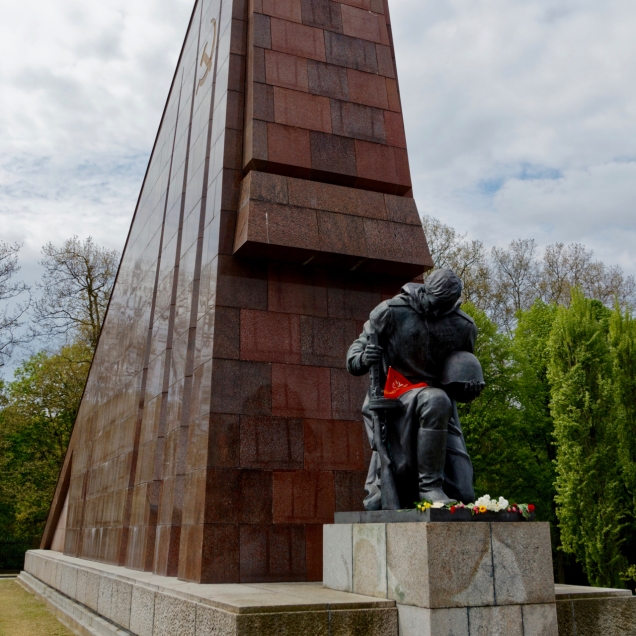 Passing the red flags, you reach a kind of balcony from which the vista of the main monument unfolds itself, with at its end, on an artificial mound, the huge statue of a Russian soldier, holding a small child on his left arm, crushing a swastika with his boot. Statue and mound together are some 30 m, or 100 ft, high. 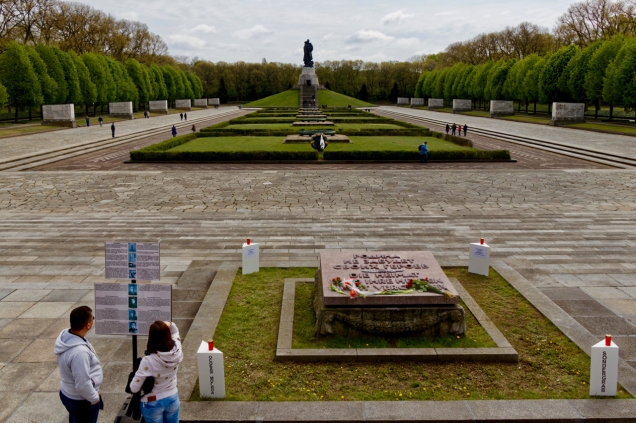 Between the balcony and the statue, spread along a large expanse of stone and grass,  are four large fire dishes. On the left and right hand sides are two symmetrical rows of seven, white chalk sarcophagi, decorated with socialist realist reliefs which express the suffering of the Soviet population and the heroism of the Red Army. 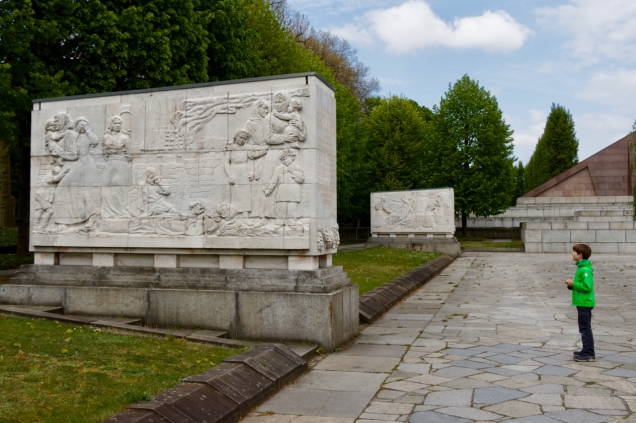 On their short sides are quotes from Joseph Stalin on the war, on the left in Russian, on the right in German translation. These inscriptions survived getting destalinised after 1956, possibly because Stalin’s words on sacrifice, suffering and heroism of the Soviet population during World War II still largely ring true. 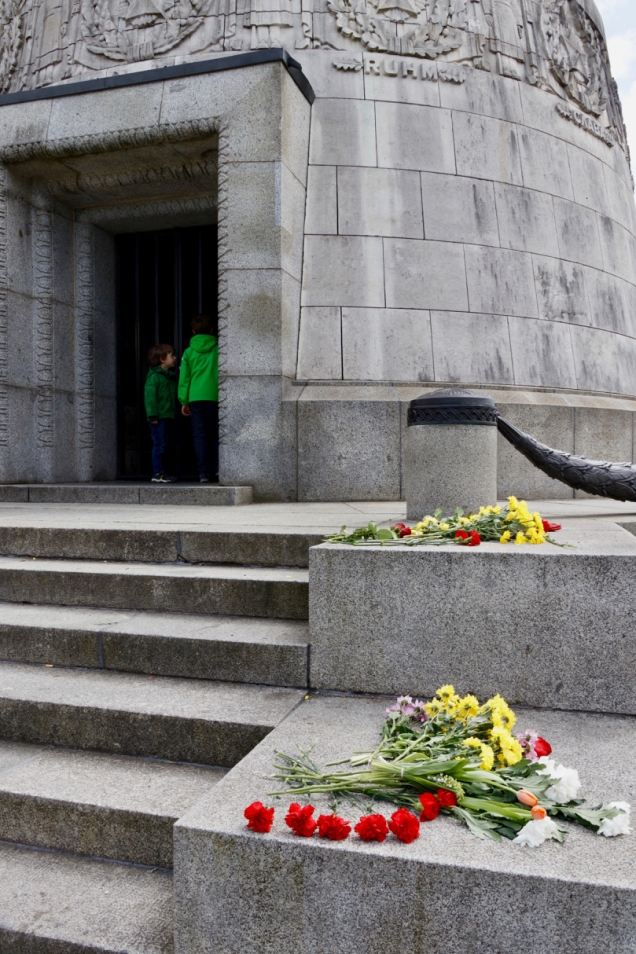 At the base of the monument, there is a cupola-shaped room that you can look into, but not enter, with a socialist-realist mosaic with Russian and German inscriptions. 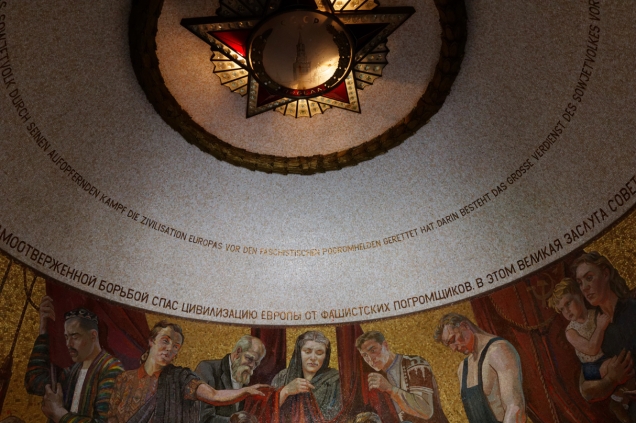 Visiting such a monument as a jaundiced Western European, born in freedom, never having experienced war,  it is easy to scoff at all the ideology and propaganda behind everything you see. But it’s important to try and find the key to the background of the propaganda – the unspeakable suffering of the Soviet population at the hand of the Nazis in World War Two, for example, and the fact that the Soviet authorities were able to build this memorial right in the capital of their arch enemy.

I’m still struggling, however, to find the key to today’s Russian propaganda on RT and Sputnik. Somehow I hope there’s more than just a corrupt country struggling to establish a place for itself in the post-Cold War world that allows it to pursue its variety of illiberal crony capitalism, a country that would rather destroy the successful example of western democracy than reform and adapt.

But the little green men in the pictures? Those are my sons.