From the top of the keep tower of Spandau Citadel, we discovered this collection of statues lumped together behind a fence in a corner of the grounds. I didn’t give them a second thought until we left – when I found out, by accident, that there was a link with the Kaiser.

They are the once-famous statues of the Siegesallee – or Victory Boulevard – a present that Wilhelm II gave the Berliners to help “make the city the envy of the world”. The statues represented all 32 Prussian royal figures, starting with Albrecht the Bear, each of them flanked by two acolytes from their era (bishops, or scientists, or artists). 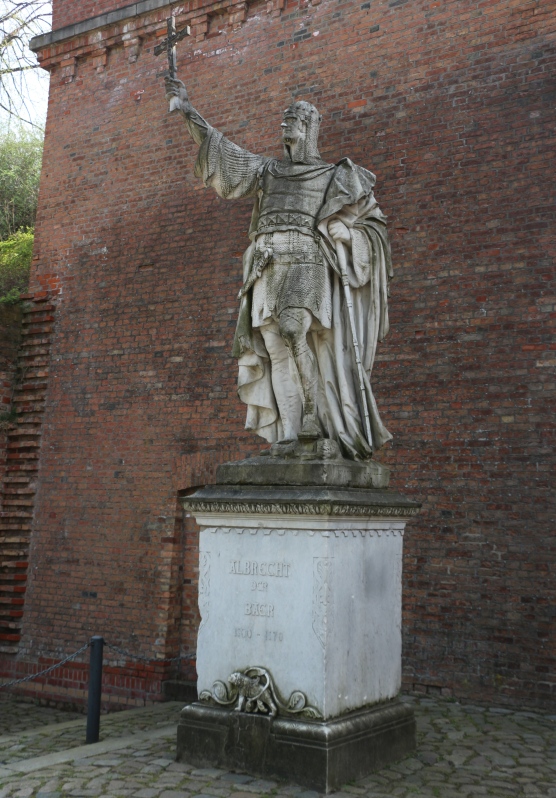 Berliners of the day are never lost for a good nickname for a new construction project and immediately called it the Puppenallee (Doll’s Avenue), or later on, when many of the statues began developing defects, ‘Neue Invalidenstrasse’. Strikes a chord as we live in the (old) Invalidenstrasse ourselves. 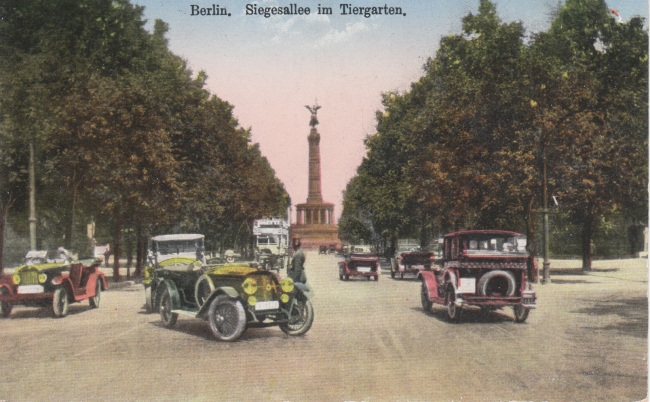 The Siegesallee ran through Tiergarten park, due North-South, just west of the Reichstag, and as you can see from this postcard, it was quite wide. During WWII, this part of Tiergarten was turned into a potato field and after the war, the Soviet Army built its famous War Memorial right across the previous trajectory of the Siegesallee. The Allies saw the statues as a clear symbol of Prussian hubris and first wanted to dump them with the rest of the city’s rubble on Teufelsberg – but a German state curator intervened and buried the statues in the grounds of Schloss Bellevue, where they resurfaced in the late 1970s.

When the Tiergarten forest was replanted, no trace was left of the Siegesallee and the Soviets even built their famous War Memorial (the one with the tanks) exactly on top of its former route.

Slowly, remembering this megalomaniac project has become acceptable again, and since 2006, a footpath exists which traces the original path of the avenue. And, apparently, the statues at Spandau are awaiting restoration for a fully-fledged exhibition sometime next year. Watch this space for more news!

In Berlin, unlike Bavaria, if you see a group of men in a beer garden wearing traditional German dress, they’re probably British. The season of stag weekends is upon us and, generally speaking, they are a pain. 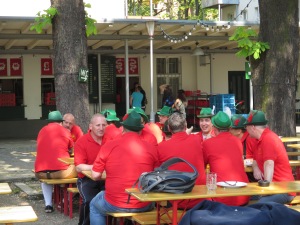 But in a beer garden they seem to fit right in! I haven’t been here long enough in warm weather to know what proper German beer garden behaviour is, but these British lads slowly but steadily filling up with fine German beer, enjoying the sunshine, and letting all of the rest of us patrons share in the fun (if only because the fun was very hard to ignore), were pretty harmless. At least, that’s my point of view now…

The Prater, by the way, is at the top of Kastanienallee, one of Prenzlauerberg’s main drags. Its history goes back deep into the 19th century and was a typical working man’s day out on a Sunday. Recommended for nice beers (they have their own Pils) but other varieties are on sale as well. Finish it off with a nice bratwurst.

Yesterday I ran my first trial tour for slowtravelberlin.com.  With the centenary of WWI getting a lot of attention, I thought it would be interesting to trace the steps of one of the Great War’s main protagonists – Kaiser Wilhelm II.

This 3 km walking tour starts at Berlin cathedral (built by Wilhelm as a protestant counterweight to Rome’s St. Peter and London’s St. Paul cathedrals) and then winds it way up Unter den Linden to finish near the Reichstag – which you might say was Wilhelm’s nemesis throughout his reign.

Although many traces of Berlin’s Prussian and Hohenzollern heritage have been lost or even eradicated, there is still plenty to see that tells the story of this curious ruler.

Next steps for the tour: publish tour dates on slowtravelberlin.com – and get walking!