Berlin’s State Opera House started life in the 1740s as Frederick the Great’s Court Theatre. It was special in the sense that it was the first European court theatre to have a standalone building that was not part of a royal palace. Frederick’s architect Georg Wenzeslaus von Knobelsdorff (1699-1753) also made this building one of the first works of German Classicism: a neo-Palladian temple front on the Unter den Linden side, possibly inspired by Palladio’s Villa Rotunda outside Vicenza, but also influenced by English Palladianism, and a “a radically new architecture consisting of load-bearing elements with all unnecessary elements eliminated” (Watkin/Mellinghoff 1987, p. 19).

The opera house has gone through a lot of reconstruction since then. Some of it was intended to improve it, such as the remodelling of the interior by Carl Friedrich Langhans (who also built the Brandenburg Gate) in the 1780s, or the controversial addition of a stage tower to handle large stage scenery in the 1920s. But just as many restoration efforts were required to repair the effects of fire, or of war. In the 1840s, Langhans Jr. rebuilt the opera house after a devastating fire, in 1941 it was one of the first Berlin victims of an aerial bombing raid, and it was reconstructed by none other than Nazi top architect Albert Speer, only to be bombed again in 1945.

This time, restoration efforts did not get underway until the 1950s, but Richard Paulick (1903-1979) decided to return, as much as possible, to Knobelsdorff’s original designs. The interior regained its original baroque atmosphere, but in a sparse, stripped manner. The only exception is the Apollo Hall, the room that Frederick planned as a dining room that sits right at the piano nobile of the building. Paulick remodelled this hall, in a mixture of classicist and baroque glory, based on the designs of the “Parole” room at Sans-Souci Palace in Potsdam, another Knobelsdorff job for Frederick. Another improvement that Paulick made in the 1950s was the addition of a huge complex of scenery building workshops, rehearsal halls and dressmaking ateliers, across the street behind the opera building itself.

In the current restoration, which started in 2010 and is due to finish in the summer of 2017, the baseline is Paulick’s work of the 1950s, just like Paulick himself went back to Knobelsdorff.

The public areas are faithfully restored and redecorated to Paulick’s designs, with one huge difference: the roof over the main opera hall and stage has been raised by about 2 metres. This means patrons on the third balcony level have more breathing space, and, more importantly, the acoustics will improve a lot.

Backstage, noone talks of restoration and monument preservation. Here, everything has been ripped out and replaced by the latest high tech stage technology.

But where star architects HG Merz, who also reconstructed the State Library, have really gone overboard is in the backstage building, Paulick’s project from the 1950s. Because an opera company usually needs to change stage backdrops several times a week, anything to make life easier for the technical staff is welcome. Here a James Bond-like subterranean empire has been created with a tunnel, wide enough for two trucks to pass each other,  that links the opera house to the back stage building. This means whole opera sets can be exchanged using a system of huge lifts and trolleys in a matter of hours.

The back stage building has a complete duplicate of the stage in the opera house for rehearsals. There are also state of the art choir rehearsal rooms, orchestra rehearsal rooms, and ballet studios. It is an artists’ paradise, just like, in a sense, the whole of Germany is an artists’ paradise – here, the state is willing, as well as able, to invest in culture! The only regret that I have, is that by the time the opera will be open for business (concert hall rehearsals and final acoustic fine-tuning are now planned to start in July 2017) I will have left Berlin… 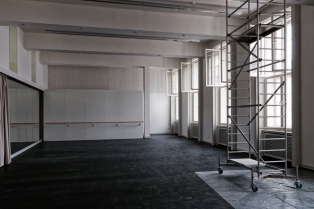 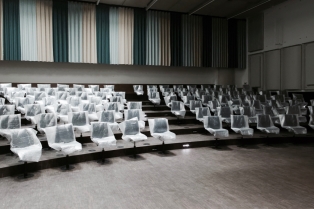